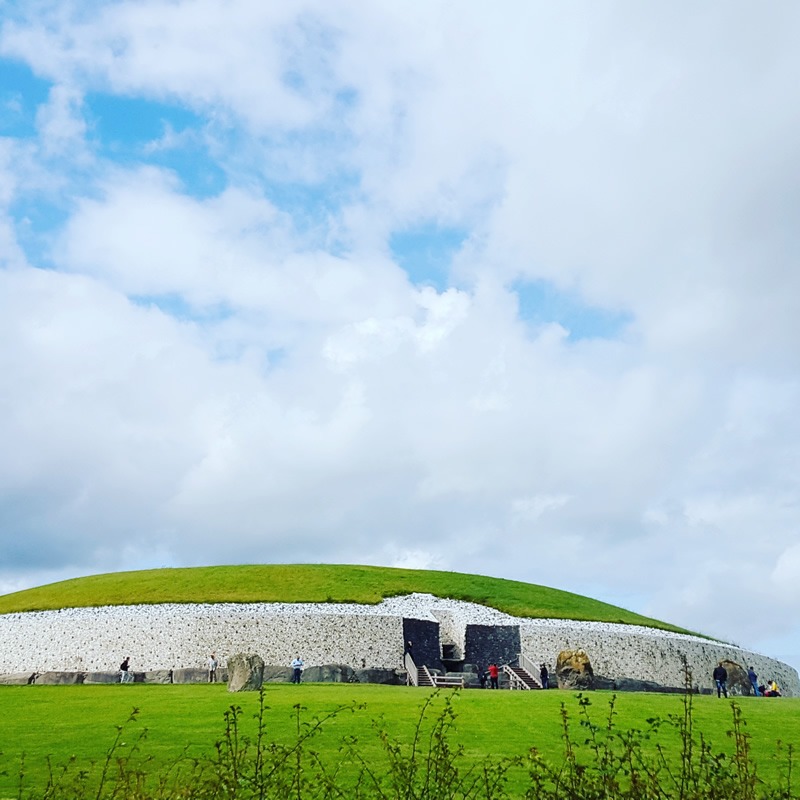 Castles, Abbeys & Local Crafts
This will be a day spent treading in the footsteps of High Kings, soldiers, monks and Hollywood stars not to mention some very special sheep!

Trim Castle
The largest Anglo-Norman fortification in Ireland, Trim Castle, located on the south bank of the river Boyne, took Hugh de Lacy and his successors 30 years to build. Central to this magnificent castle is the three storey keep – a massive 20 sided tower protected in its day by a ditch, a curtain wall and a moat.

For all the Hollywood fans, did you know Trim Castle featured as the walled town of York in the film, ‘Braveheart’ starring and directed by Mel Gibson.

Bective Abbey
Founded in 1147 by the King of Meath for the Cistercian order of monks, Bective Abbey was Ireland’s second Cistercian abbey after nearby Mellifont.

The well-preserved remains visible today date from the 13th to 15th centuries. The site was chosen as one of the locations for filming the 1995 movie, ‘Braveheart’ starring Mel Gibson who also was director.

Hill of Tara
The Hill of Tara is well known in Irish mythology as the residence of the High Kings of Ireland. Tara gets its name from Teamhair na Rí, ‘Sanctuary of the Kings’. It is said that one quarter of the Irish landscape can be seen from the hill.

A passage tomb on the Hill of Tara, Dumha na nGiall, ‘The Mound of the Hostages’ dates from 3000BC.

Another important monument on the hill is the standing stone, Lía Fáil, ‘Stone of Destiny’. This was the inauguration stone of the Kings of Tara. According to legend, when a true Irish or Scottish King placed their foot on the stone it cried out to announce his rightful reign. Why not try this out when you visit? You never know, you might find you have royal blood in your veins!

Hill of Slane
The hill rises above the medieval village of Slane, made famous over the years by the rock concerts at Slane Castle. The summit is where Ireland’s patron saint, Saint Patrick lit the paschal fire in defiance of the pagan High King Laoire at Tara, thus bringing Christianity to Ireland. The breathtaking views of the surrounding countryside stretch as far as the Irish Sea.

Monasterboice
This site contains the remains of an early Christian monastic settlement established in the 5th century. It features a striking 28m tall round tower and three high crosses dating from the 10th century, one of which is considered to be the finest example in Ireland.

Boyne Valley Wools
Located beside the world-famous passage tomb of Newgrange in lush pastures is Boyne Valley Wools and Craft Studio. Owner Alison Fullam Gogan farms Jacob sheep, a breed dating back to biblical times. The distinctive black and white fleece of the Jacob sheep is prized by spinners and weavers.

Alison hand spins all her own Jacob wool to create beautiful items such as scarves, hats and throws all available to buy plus a selection of handpicked gifts and souvenirs.

The old farmhouse has been converted into a dedicated craft studio where wool spinning demonstrations take place for visitors.

A very warm welcome awaits – families in particular will enjoy this experience – it is great fun for children with plenty to see and do.

Wicklow is known as the ‘Garden of Ireland’ and on this tour you’ll experience exactly why that is.

Custom Irish Tours will take you through the Wicklow Mountains with stunning scenery and peat bogs along the way. We guarantee you won’t be able to stop taking photographs of the amazing landscape!

We will stop at Glendalough, a monastic city and a firm favourite with visitors from overseas and locals alike. The area is beautiful for walking and exploring in, dating back to St. Kevin in the 6th century. You’ll see the Upper Lake, home to a cave close by the famous round tower where St. Kevin spent seven years.

Continuing on with the tour, we will visit the oldest hand weavers in Ireland, the Avoca Hand Weavers housed in an original mill dating back to 1723. After a tour, enjoy lunch in the adjoining cafe, famous for its freshly prepared dishes and homebaked goods.

The original whitewashed buildings of the old mill house the Avoca Store with an extensive selection of clothing, soft furnishing, gifts, food from the Avoca Pantry range and much more to tempt you into a little shopping!

Our final stop of the day is Powerscourt House and Waterfall, one of the most scenic locations on the island of Ireland, situated just outside of the pretty village of Enniskerry.

This tour is a delight for the senses with breathtaking scenery, history that comes alive in original surroundings and the finest Irish artisan goods.

We suggest that our guests wear comfortable outdoor footwear for this tour to fully enjoy walking in the beautiful countryside.

With all of our Custom Irish Tours we are happy to recommend a lunch stop on the day (please note admission fees and meals are not included in the tour prices).

Be the first to review “The Red Eye Tour” Cancel reply

We use cookies on our website to give you the most relevant experience by remembering your preferences and repeat visits. By clicking “Accept”, you consent to the use of ALL the cookies.
Cookie settingsACCEPT
Manage consent

This website uses cookies to improve your experience while you navigate through the website. Out of these, the cookies that are categorized as necessary are stored on your browser as they are essential for the working of basic functionalities of the website. We also use third-party cookies that help us analyze and understand how you use this website. These cookies will be stored in your browser only with your consent. You also have the option to opt-out of these cookies. But opting out of some of these cookies may affect your browsing experience.
Necessary Always Enabled

Any cookies that may not be particularly necessary for the website to function and is used specifically to collect user personal data via analytics, ads, other embedded contents are termed as non-necessary cookies. It is mandatory to procure user consent prior to running these cookies on your website.